MeteoTracker – the weather station for those on the move 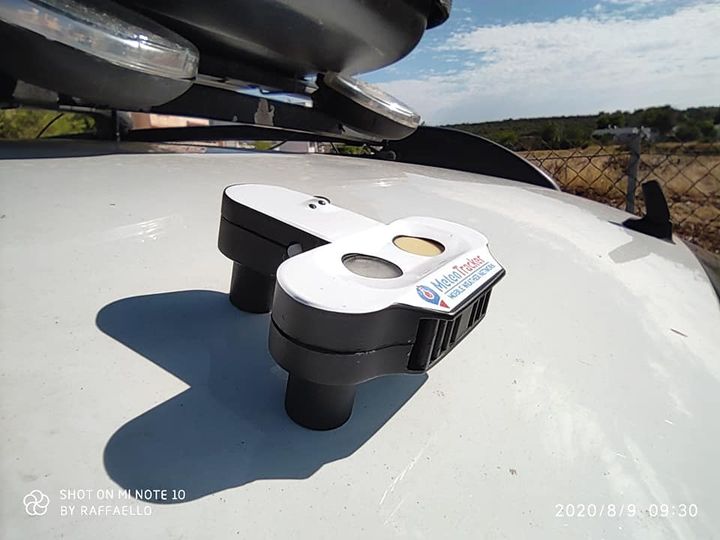 On our Facebook pages, we often show the tests we are carrying out with MeteoTracker: a revolutionary system for measuring, mapping and sharing meteorological parameters on the move.

During a session, the instrument (which is the size of a computer mouse) will measure temperature, humidity and pressure; this data is then sent to an app, which adds GPS coordinates, calculates the altitude and sends all data to the server which also records the route taken by each tracker.

The software is constantly evolving so there will be many more calculated parameters, such as dew point, QNH (reduced to sea level pressure), a radiation index, etc.

It is very easy to use: you only have to download the App the first time you use it and you will have to do Bluetooth pairing to recognise the peripheral device. Once

it is switched on, the smartphone will recognise it automatically, it can then be placed in position on your car thanks to its strong magnets and after a few seconds (time enough to fix it in place) you will be ready to go.

The App consumes little smartphone battery and can easily continue to function in the background. 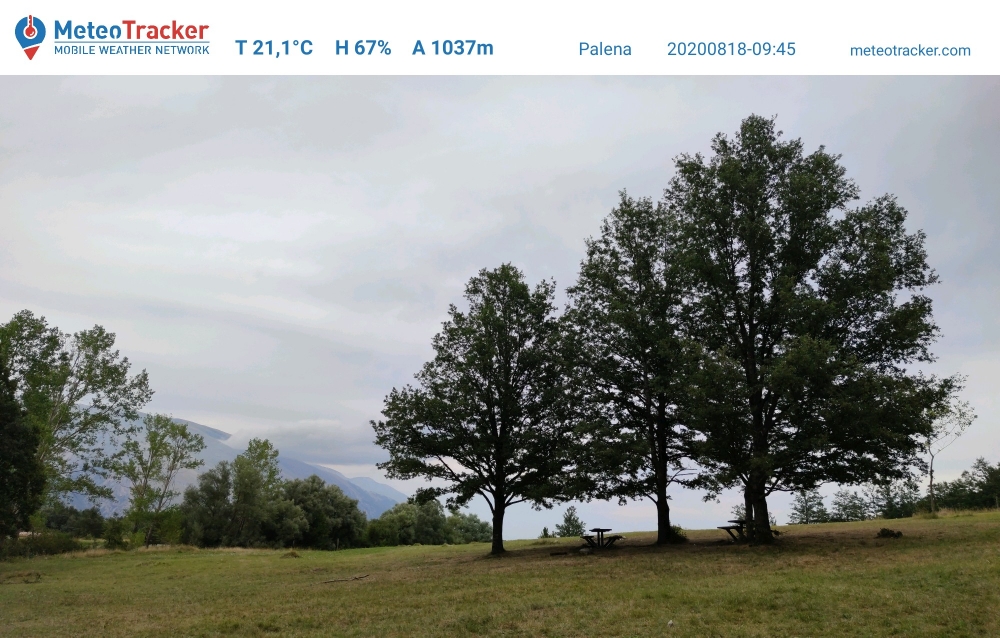 If you wish to keep it active, it will show you your route on a map, the altitude, temperature or humidity charts, the maximum or minimum temperature registered during the session and obviously, the real-time temperature, altitude and speed.

During the trip it is possible to take photos with the camera on your smartphone, through the App, which are then sent to the online server so that you can review them on the web portal and are also recorded on your phone so that you can send them with other software.

The meteorological conditions measured by MeteoTracker and the name of the location obtained from the GPS coordinates is reported on a band which appears across the top of each photograph.

If you make any stops during your trip, it is worth remembering to press pause to avoid recording temperatures with a high solar radiation error (correct measurement of air temperature works better while on the move, even at low speeds).

At the end of the trip press stop, and the App will remind you to remove the MeteoTracker from the rooftop of the car.

Upon arriving back home, you can view your trips on the web platform after registering with a Gmail account.

Those most attentive and curious among you will notice that there are two circular windows on MeteoTracker, one white and the other transparent, 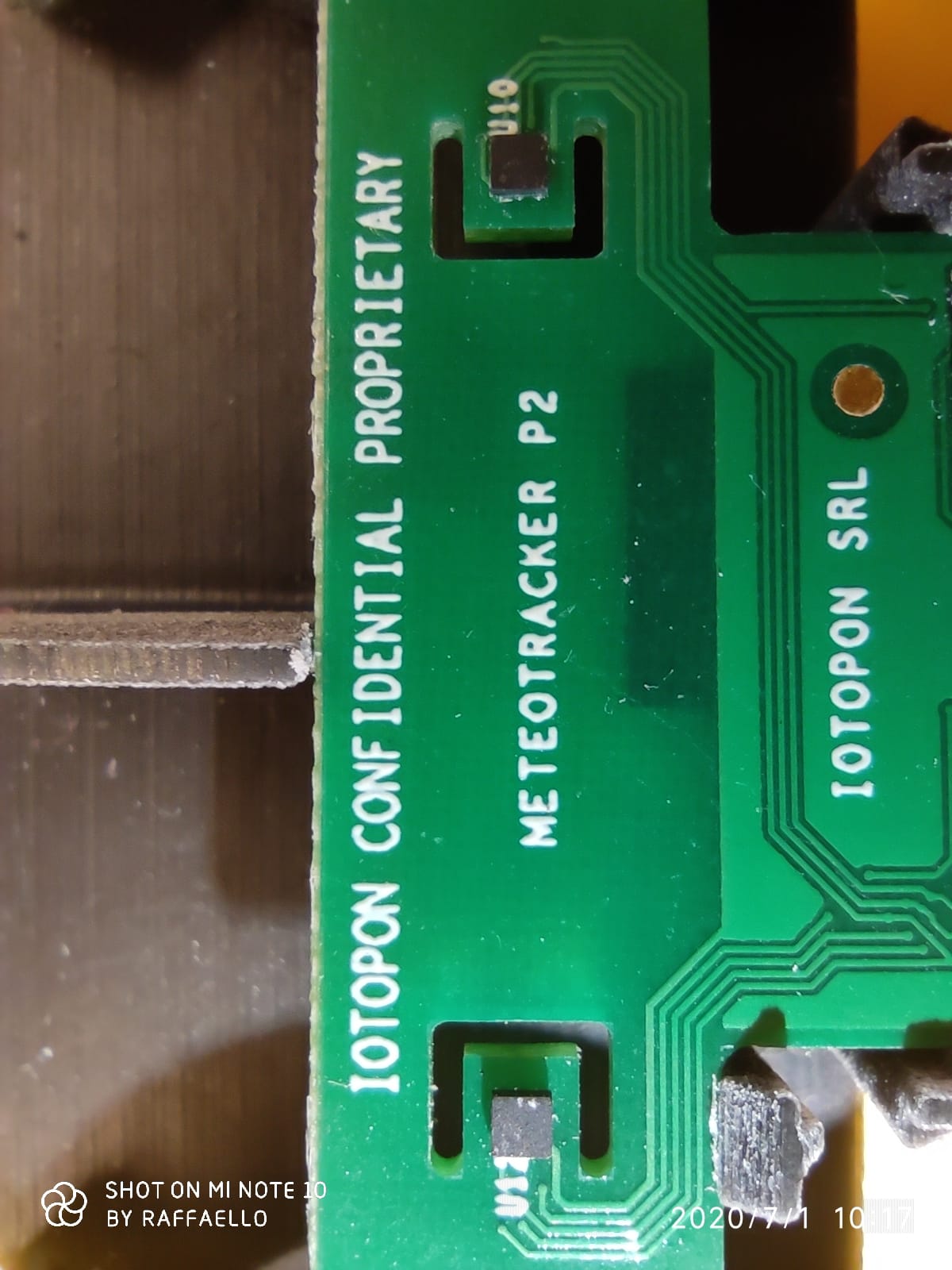 the purpose of which is to make the two tiny temperature sensors located underneath, of 1.5mm on each side, radiate differently. It is precisely here that the

The temperature difference that the two sensors report (greater when the sun is strong, less when the sun is weak) thus becomes a parameter that allows you to determine and correct the error caused by solar radiation.

In this way, the data reported by MeteoTracker maintains greater accuracy even at a very low speed (when ventilation is very weak, and the radiation problem is particularly noticeable).

Furthermore, since shielding is not required, the sensors have greater exposure to the air flow and, consequently, the all-important measurement speed is maintained.

The RECS system also solves a third problem that would emerge in measurements taken through the classical approach, namely the fact that in the presence of solar radiation the temperature reported by the measurement system would rise as speed decreases and, vice versa, would fall when accelerating:

With the patented MeteoTracker system, a counter-reaction is established whereby as the speed decreases, the difference in the temperature values reported by the two sensors increases and therefore the correction factor also increases, which realigns the measured value to the correct data. 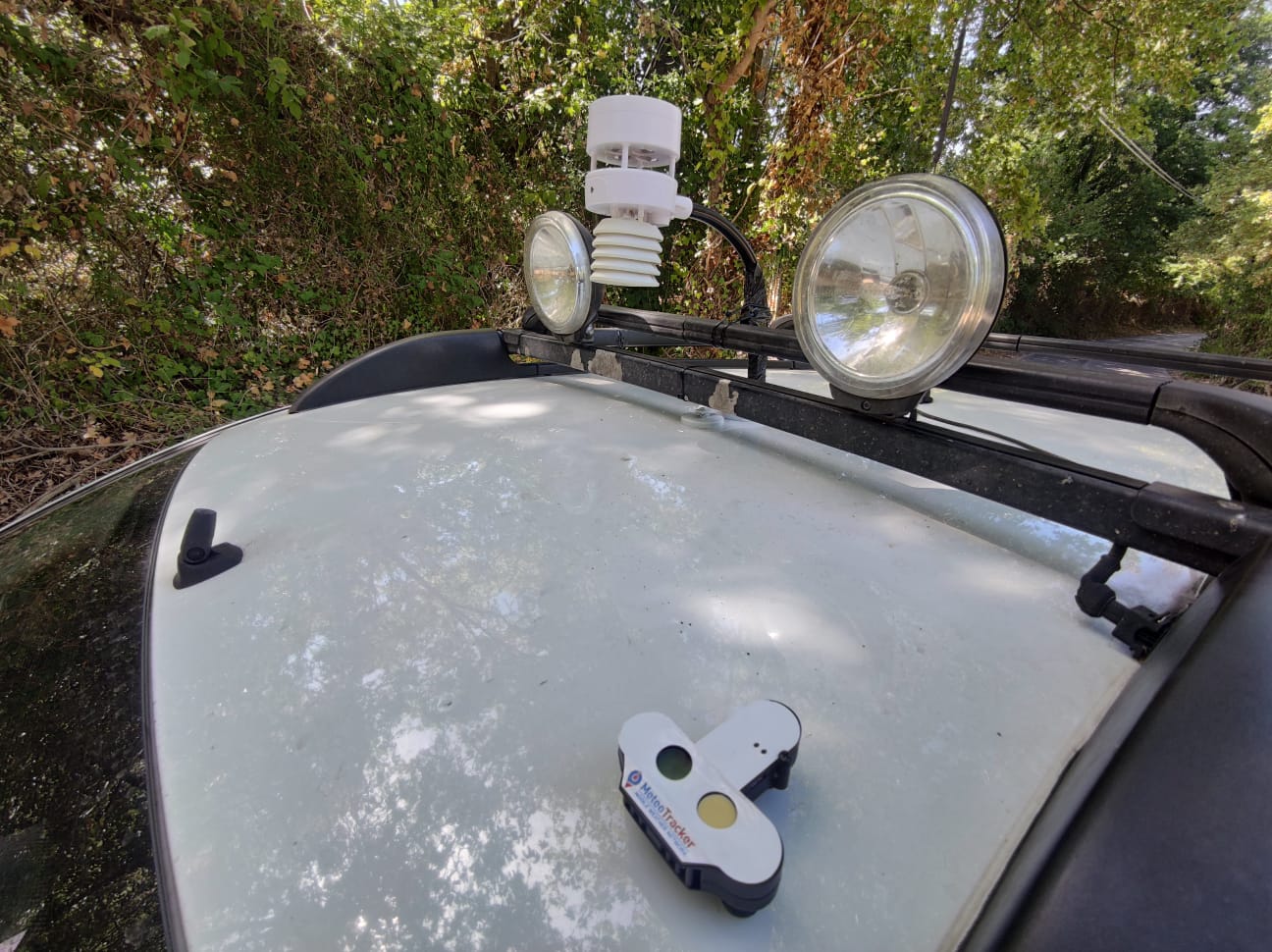 For those who are sceptical regarding this error correction system because of the direct solar radiation that hits the temperature sensor, I recommend the below article which explains how complicated systems, used in the measurements from radiosondes, are based on the same principle of physics, although with very different solutions from the original one implemented on the MeteoTracker sensor: Dual temperature sensors with different emissivities in radiosondes for the compensation of solar irradiation effects...

To be sure of this, however, KWOS wanted to do an experiment, installing a real weather station on a car to which a different method for correcting the measured temperature was applied, by way of the energy balance formula , to prevent the surface of the car distorting its measurements.

The temperature was recorded and monitored, during a journey of about 40 km in which the travel speed varied depending on the traffic and the orography of the land. We encountered altitudes that ranged from approximately 30 m above sea level up to more than 300 m above sea level.

The data from the weather station was recorded every 5 minutes, therefore, with a much lower sampling density compared to that of MeteoTracker which is every few seconds.

Some of the photographs taken during the trip can be seen below, showing the set-up used and the side-by-side monitoring of the two weather stations.

We recorded the following data:

In our opinion, the values of MeteoTracker are perfectly in line with those of a conventional weather station, also considering the updating speed which in some cases causes the temperature to fluctuate even by half a degree in just a few seconds.

For the sake of completeness, the values of the other KWOS stations recorded at 18:05 when we reached the office by car were as follows:

Given such excellent performance, we wanted to use MeteoTracker during a long trip in order to observe the stability of the App, the data transmission and the consumption of the instrument.

In total, we travelled almost 700 km and it was in use for approximately 8 hours. From 100% charge, it indicated 88% when we reached our destination.

The acquisition time is very fast, allowing observation of even the slightest variations in temperature.

During the trip, we paused the session when we stopped to get petrol, but we did not pause it when we were stopped in traffic. 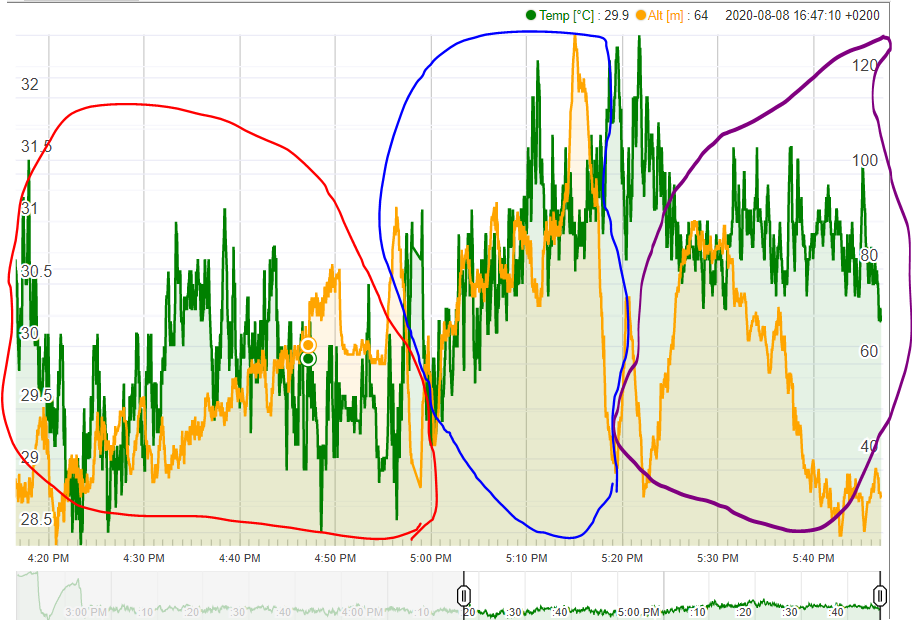 We appreciated the photography function, very good for sending photos to acquaintances and friends or as part of an archive.

There were some gaps in data transmission unfortunately caused by the prolonged lack of mobile phone coverage.

From a meteorological standpoint, how the measured data is then used depends on the imagination and the needs of the user. It is certainly useful to observe how the temperature varies if you move to a higher altitude, yet in such a long trip this can depend on the time of day as well, i.e. if you leave at dawn and arrive at 10 a.m.

For example, by analysing the sections of movements in the Apulia region when we move from one sea to another (Adriatic-Ionian), it is possible to see the different exposure to the sun and the consequent fall in temperature, which is also due to cooler winds. 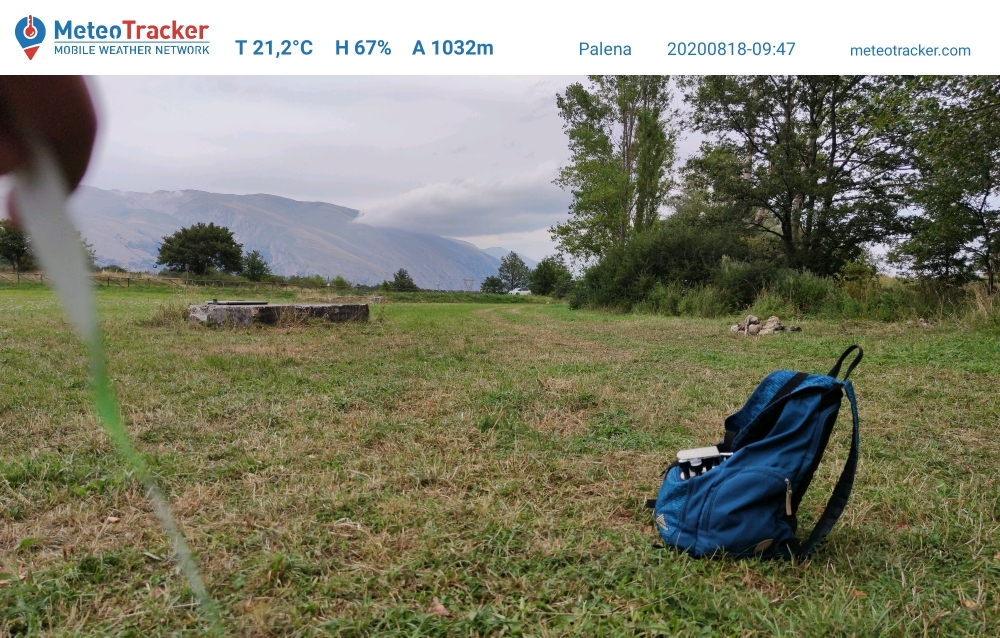 This session highlighted all the qualities of MeteoTracker and how easy it is to use. However, we wanted to experiment with another use which was while Trekking in the mountains.

Although it was not designed to operate at such low speeds, such as during a walk or even while stopped during an uphill climb, we tried installing it onto a backpack under a metal U-shaped bracket. We did this in order to prevent it 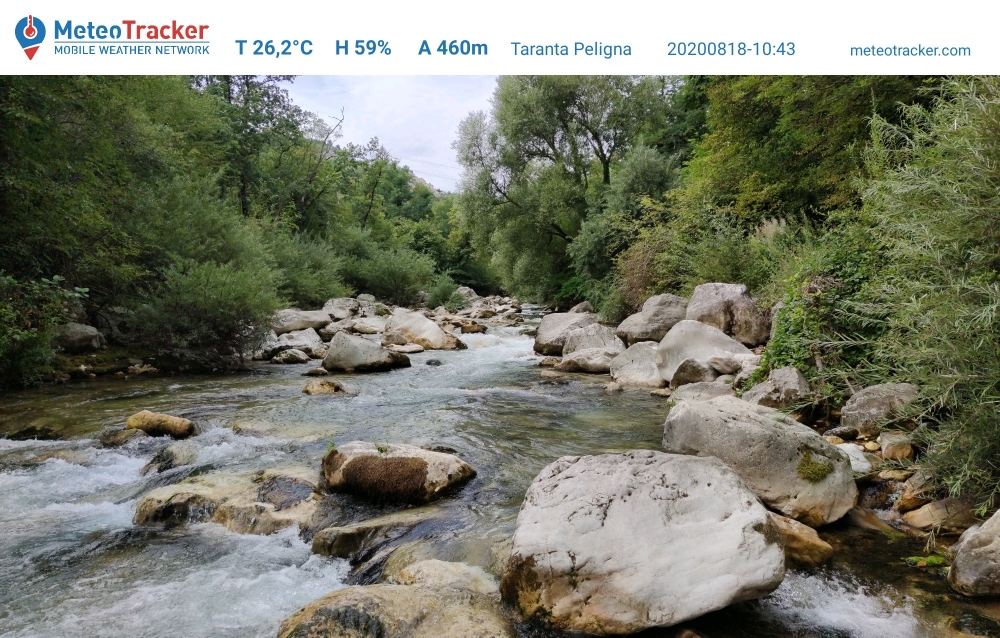 (to some extent) from getting hit directly by the sun’s rays and to facilitate its task of correcting the temperature at low speed.

The behaviour was excellent compared, when possible, with the weather stations of the mountain refuges.

What is certain is that we must avoid standing still under the sun for too long. Overestimation is always lying in wait.

Another test carried out by KWOS took place during the onset of a summer storm:

we moved from a flat area where the presence of an updraft of hot air towards the storm cell was evident, to another area where there was a significant downdraft of cool air.

The speed with which the data were updated by MeteoTracker allowed us to highlight the drop in temperature while passing under the storm.

The subsequent examination, carried out on the web platform and on the lightning strike tracking websites, correlated the storm cell with the data measured by our instrument.

The pressure also dropped sharply, as did the humidity measurement.

More mobile vehicles with MeteoTracker would have made it possible to study the ground structure of the storm cell and obtain important data on the development of summer storms linked to the orography of the land, a sector that is still relatively unexplored due to a widespread lack of meteorological sensors in the area.

In this technical data sheet dedicated to MeteoTracker, we would also like to show you the beautiful images and the report taken from the MeteoTracker.com, website for a session carried out by a paraglider.

It therefore shows extreme versatility in the application possibilities for this little gem such that every meteorology enthusiast, every association and research group should have one with them when travelling by car, bicycle or any moving vehicle, including it as one of their standard instruments for monitoring the weather.